AugustFest aka when Author Talk has a new video every Friday is over.  We’ll return to our regular schedule of new interviews every other week beginning at the end of September. 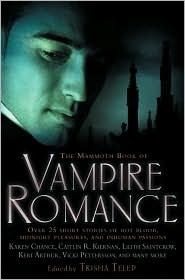 In the meantime, we’re going to profile one of our earlier Author Talks with Rachel Vincent.  She’s part of a 30 story anthology, The Mammoth Book of Vampire Romance.  Along with Rachel, check out this great line-up of paranormal authors:

Here is Rachel’s Author Talk Interview.  This is the video where we truly discovered Gena’s goal and motivation in her AT appearances:

Roxanne St. Claire Behind The Scenes

Gena has only ever written one post for Author Talk – here’s her second:

When Jill and I decided to take our shenanigans on the road create a new segment, Author Talk on Tour, we stopped in Alabama (Jill whined until we stopped had never been), Georgia and Florida.  Idiots Smart girls that we are, we traveled during hurricane season while the airline had discounted tickets.  We couldn’t wait to finally begin the shenanigans hang out with some of our favorite authors.

First up was the gorgeous and talented Roxanne St. Claire and the beautiful Gulf Coast.  Her jaunt along the beach to perform First You Run was lacking only cornrows more memorable than Bo Derek’s.  Crouching behind the chair for Then You Hide was very shenaniganie brilliant.   Her ability to catch a marshmallow with her teeth, as well as her death scene were very VERY shenaniganie magnificent.  Jill and I aren’t jealous of her skills.  Really. 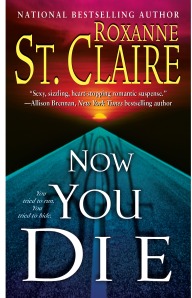 Former Bullet Catcher and lone wolf investigator Jack Culver is on a mission. Thirty years ago, an innocent woman was convicted of murder. Jack believes he’s found the real killer — but to take down one of the highest legal authorities in the land, he needs access. Serious access. Unfortunately, the one person he knows with that kind of power is his ex-boss and ex-lover, the woman who still haunts his dreams.

Bullet Catchers owner Lucy Sharpe realizes she’s being used for her connections, and she intends to use Jack Culver right back. She’s determined to see justice served, even if that means partnering with the man who once found his way past her iron shields. This time, she’ll be strong enough to avoid Jack’s persuasive touch.

But when passion flares, and they become the killer’s target, Lucy and Jack don’t just break some rules — they shatter them. And that means risking everything: their jobs, their hearts…and their lives.

You can visit Roxanne at her website here, and buy Now You Die here.

Our first in our Author Talk On Tour series.  Here we are on the beautiful Florida beaches!

Crystal Jordan Behind The Scenes 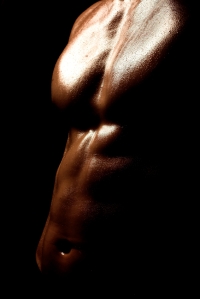 My husband is pretty used to seeing some unusual pictures on my computer, but even he (apparently) has a limit on the amount (and it was a lot) of man candy parading across the screen.

This is my work, honey.  My work.  I HAVE to look at pictures like this.

It seems it was only a few days ago that Crystal knocked us down in Dallas to tell us she’d sold to Kensington, and now her books are on the shelves.  Congrats, Crystal!

They’re primed and primal, untamed and unstoppable, always ready to go further, harder, longer to bring a woman pleasure that’s wild, fiery, and out of this world.

To the Walapai Apache of Arizona, a puma’s cry has always been a dangerous omen. Amy Murphy, practical to the core, scorns such legends, until she attends a pow-wow near Flagstaff, where she’s immediately drawn to a powerful, dark-eyed man. Her attraction is intense, inexplicable, irresistible-leading her into a wildly carnal encounter that awakens the animal within.

“In Ice” by Crystal Jordan

When Jain Roberts’ ship crashes on a distant, futuristic planet, she’s rescued by Kesuk, the lusty clan leader of the Arctic Bears. This magnificent creature with white-blond hair and a potent masculinity haunts her dreams-dreams he intends to make deliciously real, as he draws her into a realm of complete sexual abandon. 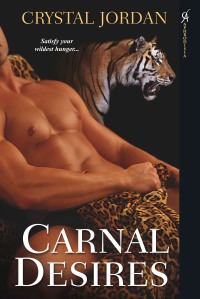 Centuries after the destruction of the earth, several species of altered humans still survive. These shape-shifters are exciting and exotic creatures, and their human forms do little to mask their most primitive and passionate instincts.

Mahlia is a snow tigress in heat and now that her tiger king has returned to rule the planet Vesperi, she can no longer deny her desperate need to mate. She greets him as a woman, but their desire for sex is uncontrollable as they come together with a primal passion.

When Lady Katryn is called back to her home world to join Lord Nadir’s harim, she is curious to learn more about her weredragon nature. What she discovers is a scorching eroticism that consumes her all over.

Dr. Sera Gibbons is one of only two human survivors after a five hundred year cryogenic freeze. Saved by the merman Bretton Hahn, she savors the way he caresses her and makes her live out her wildest fantasies.

Carnal Desires hits the bookstores November 25, you can pre-order it here.

You can visit Crystal at her website here, and her main blog here.