Deidre Knight Behind The Scenes

Gena and I have two words from this Author Talk: Prop Wine

Normally I have around 15 minutes of video after shooting an Author Talk that we whittle down to about 7 minutes.  For Deidre Knight, we had nearly 30!  But yes, the video is still under 8 minutes.  Which means there is A LOT of unusable footage, most of which we decided to ad lib on the spot.  Things that HAD to be in this Author Talk.
While editing, I couldn’t figure out why we were doing what we were doing or just what was so funny.
Of course I could be lying.  After all, in such a short time with Author Talk, we seem to have surprisingly generated a lot of comments.  One or two have mentioned our acting ability.  I’d like to think we address that here.  Real wine or prop wine…you decide.
Several said they wished Gena had asked Deidre the burning question every reader wants to know.  Take heart that she answered her own question after the credits.  According to Gena Showalter, Red Fire is the best book she’s ever writ eyn! 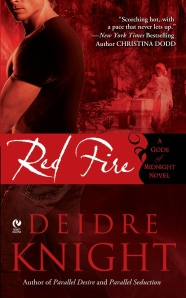 Eternity has become a prison for Ajax Petrakos. Centuries after he and his Spartan brothers made their bargain for immortality, Ajax struggles to maintain his warrior’s discipline. His only source of strength is his hope that he will soon meet the woman once foretold to him–the other half of his soul, Shay Angel.

Ajax searches for his destined mate on the haunted streets of modern-day Savannah, but he isn’t the first to find her. Shay, the youngest of a powerful demon-hunting clan, can see the monsters that stalk the steamy Southern nights–an ability that draws the deadly attention of Ajax’s worst enemy. As Shay and Ajax race to solve a chilling prophecy–one that could spell Ajax’s death if they don’t succeed–a fated passion arises, threating to sweep away everything in its path.

You can buy Red Fire (beginning Oct. 7, 2008) by clicking here.  Stop by Deidre’s website here or go to the website entirely devoted to her Gods of Midnight series here.