Shamelessly, some people like to put out the same content over and over again hoping you’ll think it’s new.  And here at Author Talk, we think that’s a great idea.  See, the problem with working is that usually people expect you to keep doing it. (Same goes for animals and small human children – they expect to be fed – usually more than once a day.)

Of course Kresley has been VERY busy since we last invited her for an interview.  Just how amazing does Sweet Ruin sound – out in December of 2015

A foundling raised in a world of humans
Growing up, orphaned Josephine didn’t know who or what she was—just that she was “bad,” an outcast with strange powers. Protecting her baby brother Thaddeus became her entire life. The day he was taken away began Jo’s transition from angry girl…to would-be superhero…to ruthless villain.

A lethally sensual enforcer on a mission
Whether by bow or in bed, archer Rune the Baneblood never fails to eliminate his target. In his sights: the oldest living Valkyrie. Yet before he can strike, he encounters a vampiric creature whose beauty mesmerizes him. With one bite, she pierces him with aching pleasure, stealing his forbidden blood—and jeopardizing the secrets of his brethren.

A boundless passion that will lead to sweet ruin…
Could this exquisite female be a spy sent by the very Valkyrie he hunts? Rune knows he must not trust Josephine, yet he’s unable to turn her away. When Jo betrays the identity of the one man she will die to protect, she and Rune become locked in a treacherous battle of wills that pits ultimate loyalty against unbridled lust.

But in the meantime, you can warm up those incoming autumn evenings with The Master. 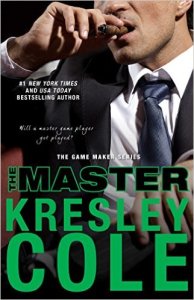 Except her.
Catarina Marín was a well-off young wife until her world fell apart. Now she’s hiding out, forced to start working as an escort in Miami. Her very first client is beyond gorgeous, but when he tells her what he plans to do to her, Cat almost walks out of the door.

If pleasure is a game, play to win.
After their mind-blowing encounter burns out of control, the lovers crave more. If they escape the deadly threats surrounding them, can Maksim overcome his past–to offer Cat his future? Only then will she tempt him with what he really wants: her, all tied up with a bow.