Sharon Sala Behind The Scenes

There is a lesson in the Sharon Sala video.  A lesson you can clearly see when looking at me.  It’s better to film scenes where you’re wearing a hat AFTER you film the scenes without the hat.  My hair is not big at all, which, if you’ve seen our very first AT Extra, you know I prefer my hair large.

Or the warning could be not to wear the big hat and hunter gear and acting silly in the car on the way to a taping.  I could issue this warning, but acting silly always trumps looking good.

Despite refusing to wear that really cute horse costume we so happily brought along, Sharon Sala is the nicest person you’d ever want to meet.  Dinah McCall, well…say it with me.  Dinah McCall is kind of a bitch. It’s been said that authors will take some part of themselves and use it in a book – Dinah clearly asserted herself in The Healer, because just like the hero, Dinah was apparently raised by wolves.  She got irritated with the most harmless of questions.

But Sharon’s lead character, Jonah Gray Wolf has the power to heal, and so someday, maybe he can use those skills on Dinah. 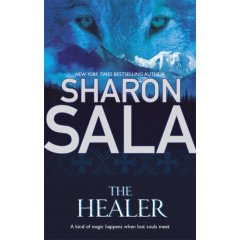 All his life, Jonah Gray Wolf has had an uncanny connection to animals and the power to heal the sick and wounded. Driven from the only home he’s ever known by those who wish to harness his gift for profit, he becomes a drifter, working in out-of-the-way towns, never staying long. It’s a lonely life, but Jonah knows he’s still being hunted—he can’t afford to get close to anyone who might learn his secret.

In West Virginia he finds Luce, a tough but beautiful loner who knows all about keeping people at a distance—a kindred soul with whom he might dare to make a life. But the hunters have caught Jonah’s scent again. Danger is coming to their mountain refuge—a confrontation that will be decided only by a force of nature.

You can visit Sharon (and Dinah) on Sharon’s website here. Buy The Healer here and pre-order Aftershock, from Silhouette Nocturne here.

That is clearly the sounds of a wood chipper I’m hearing in the background when I’m signing off.  I think I got out of there just in time before Dinah really got mad!

If I’ve said it once, I’ve said it at least five times, authors are difficult interviewees.  Here you get two authors for the price of one.  Since the price is free, I’m not sure what kind of a bargain you’re getting.  Anyway, you get the first author Sharon Sala, but you’ll also get Dinah McCall, who quite frankly acts like she was raised by wolves…

Look for Behind The Scenes Next Week!